While a key issue in geography is to investigate how spatial and social polarisation interact to produce residential segregation, particularly in terms of social class, race or ethnicity, the term ‘segregation’ is barely associated with how space and age relations intersect and develop into processes of generational separation. Conventional wisdom perhaps suggests that residential age segregation is expected and unproblematic but, like other forms of segregation, the increasing differentiation of places by age can hinder essential opportunities for older and younger individuals to meet and interact, as well as associated policy implications for social cohesion and the organisation of society. In this blog post, I present some preliminary findings looking at the relationship between housing (un)affordability and residential age segregation in England and Wales.

Progressing knowledge of these under-researched dimensions of residential age segregation in both urban and rural areas is particularly important against the backdrop of the housing crisis in general and decreasing housing affordability in particular. While age is an important driver of spatial sorting, little is known about the effect of age-linked housing (dis)advantage on residential age segregation. It is widely acknowledged that the main mechanism of residential segregation is the varying access of households to housing.

From this perspective the patterns of residential differentiation by age to be found in a given city, town or village are not simply to be explained in terms of residential choice or life cycle residential decisions without constraints within urban or rural settings but, rather, these must be related to a wider-ranging set of social forces characteristic of contemporary societies.

On the one hand, population ageing and the salience of large numbers of older people reaching retirement age and beyond inevitably means that the process of demand and supply of housing is increasingly shifting towards the needs and preferences of older cohorts. On the other hand, the combined effects of neoliberal and post-Fordist restructuring, with declining relative incomes and growing labour market uncertainty, are leading to an increasing number of (predominantly young) people with fewer, more insecure and less affordable housing opportunities. Within this context, it is not surprising that housing (dis)advantages between older and younger adults have become a source of potential intergenerational conflict.

Indeed, housing per se has become a UK policy priority on the agenda of intergenerational fairness (Authority of the House of Lords 2019[1]), and housing debates have gained a prominent and conspicuous profile with the idea that ‘Britain’s stark housing divide is no longer based on class and income but is largely between the generations’(The Independent 2015[2]).

Assessing the relationship between housing (un)affordability and residential age segregation

As a point of departure, we conducted some preliminary analysis (see Figure 1) to interrogate the relationship between housing (un)affordability[4] and residential age segregation[5] in England and Wales.

The results from this preliminary analysis reveal three important things.:

Other preliminary analyses (not shown) also indicate that this relationship is not driven by the effect of London house/rent prices alone, as a similar relationship between housing (un)affordability and residential age segregation is found in both urban and rural areas outside London. Thus, age can be considered a significant dimension along which residential neighbourhoods with different levels of housing (un)affordability are becoming residentially segregated.

Some consequences of residential age segregation

The potential socio-spatial consequences of increasing age segregation due to (un)affordable housing are undoubtedly relevant. For instance, there are already growing and worrying signs of an “us-and-them” attitude that is potentially being exacerbated by a “political” model where housing and the competition for space are controlled to varying degrees by power relations between age groups. The inability of many (young and older) people to access desired housing can impact other aspects of life, such as starting a family, employment opportunities and ageing in the right place. Because affordable housing is a vital part in redistributing and fixing the population in neighbourhoods, it also represents a key part of any residential integration and social cohesion policy. Thus, gaining further understating of this relationship is of more than academic interest and has wide-ranging implications for planners, and those concerned with housing policies.

Figure 1. The relationship between local housing (un)affordability (for sales and rentals) and residential age segregation by quintiles of housing affordability in England and Wales, 2011 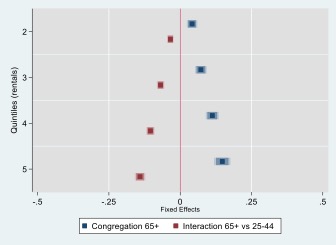 Source: Own elaboration using Census data for all 2011 Output Areas (OAs) and Middle Layer Super Output Areas (MSOAs) in England and Wales by age group; local characteristics on housing and population for MSOAs from 2011 Census; and data on house prices (for sales and rentals) and household incomes at MSOA level from the Office for National Statistics and Zoopla Property Group (the latter processed by the Urban Big Data Centre, University of Glasgow).

Note: Regression coefficients from multivariate multilevel models, where MSOAs (level 1) are nested within groups of Local Authorities Districts (LADs) (level 2) and within supergroups of Government Office Regions (GORs) (level 3). The models include controls for local housing and population characteristics (housing tenure, accommodation type, population density and ethnic diversity). Coefficients are shown with confidence intervals at 95% and 99% (wider shaded area) level of confidence. Reference category refers to quintile 1 or the lowest fifth of the data (20%) in England Wales (i.e. the most affordable areas). Quintile 5 refers to the least affordable areas. The examination of the association between the measures of residential age segregation and (un)affordability ratios for sales employed the full sample of small areas (7,201 MSOAs), whereas the equivalent analysis using (un)affordability ratios for rentals used a reduced sample of small areas (5,944 MSOAs) due to the unavailability of rent price statistics in some areas (1,257 MSOAs) in 2011.

[2] See article published on 9th March 2015 by The Independent: https://www.independent.co.uk/news/uk/home-news/baby-boomers-buying-up-properties-and-renting-to-young-people-who-then-cannot-afford-to-buy-homes-10094548.html

[4] Housing affordability for each small area (Middle Super Output Areas) is computed as the ratio of house/rent prices to net household (annual) income. To give an indication of the most and least affordable areas, quintiles of housing affordability are used. These divide our rank-ordered data into five equal parts (Q1: 20%, Q2: 40%, Q3: 60%, Q4: 80% and Q5: 100%).